At 18, Nate Gordon is Paying it Forward in a Big Way

Nathaniel “Nate” Gordan was only 13 years old when his parents sent him to live with his aunt in North Philadelphia. Born in Covington, GA – a small city about an hour outside of Atlanta – Nate says he at first had a hard time getting used to the hustle and bustle of a big city. Covington has a population of nearly 14,000 people versus the 1.6 million Philadelphians who live in the city.

When asked why he moved to Philadelphia in 2017, he says his parents wanted him to get a better education. Nate says that personally, he was looking for a much-needed change. In fact, Nate has experienced a great deal of change over the past five years.

When he first moved to the city, he was enrolled in virtual learning; his aunt did not want him to attend his neighborhood school. He later enrolled in Sankofa Freedom Academy Charter School. That was until the family issues he escaped followed him north and interrupted his education.

Nate soon found himself in the foster care system going from group home to group home. Despite the uncertainty he was facing, at 16, Nate made the decision to enroll in Community College of Philadelphia’s Gateway to College program. He says he was determined to not only get his life back on track, but to get ahead in terms of his academics.

“Getting my education has always been a priority of mine,” Nate said. “Even in middle school, I wanted to take college classes. It’s been a goal that I have wanted to accomplish for a long time now.”

Community College of Philadelphia’s Gateway to College program was established in 2006 to serve “opportunity youth” who have disengaged from the educational system. This dual enrollment program, in partnership with the School District of Philadelphia, offers students ages 16 to 21 the opportunity to not only earn their high school diploma, but to earn college credits toward an associate degree or certificate.

Nate is one of the 100 students the Gateway program serves each year. He describes the program as “very impactful.”

“The Gateway program has helped to facilitate where I am now,” Nate said. “The program’s impact is much bigger than the educational aspect. It also includes a lot of emotional supports. They helped me get a paid internship and even enter the Supervised Independent Living program so I can have my own apartment.”

“It’s opened up a whole new world of opportunities,” he added. 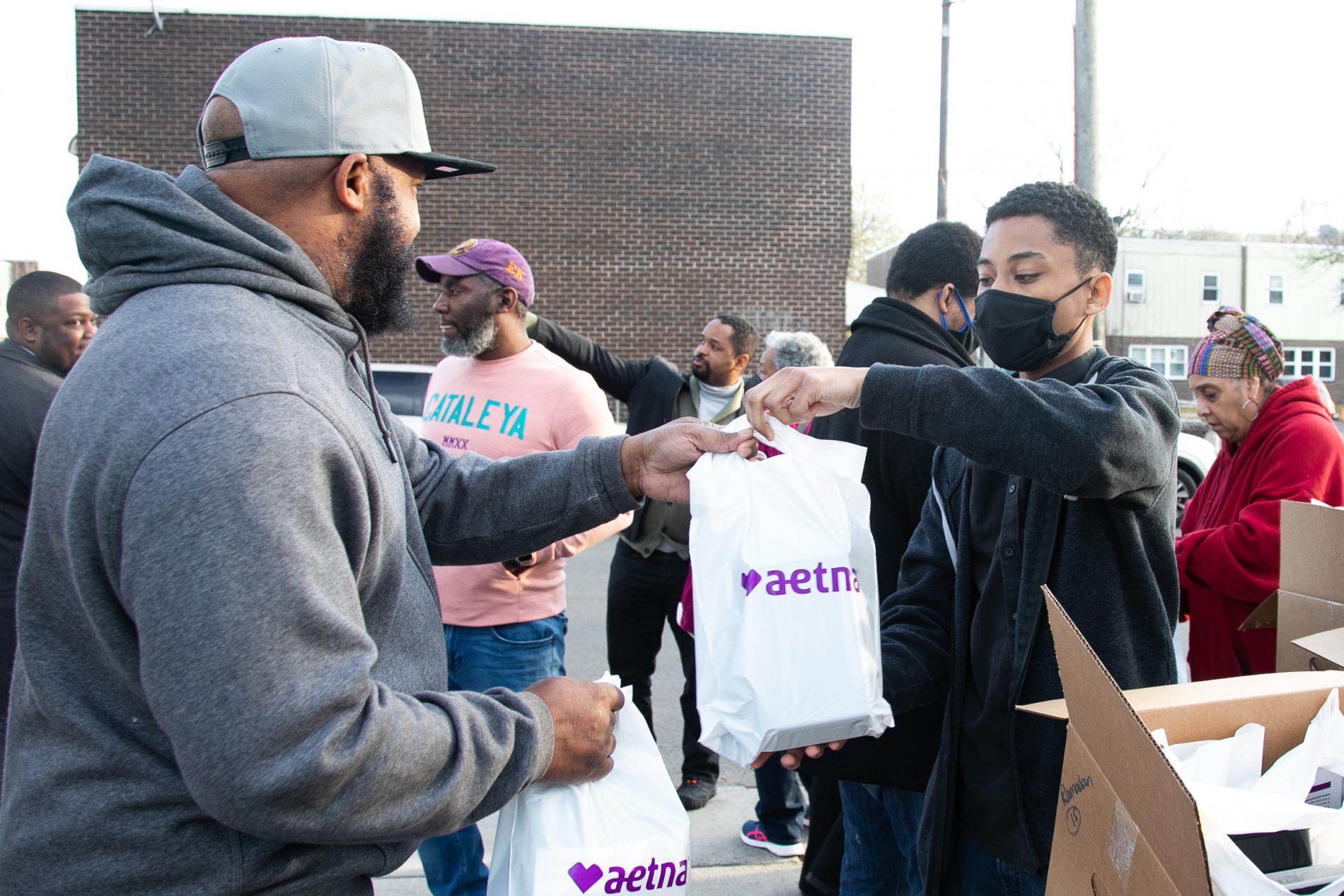 In addition to his 3.96 GPA, Nate is very involved on and off campus. He interns with state Sen. Sharif Street and often volunteers with the College’s Institute for Community Engagement and Civic Leadership. He’s been able to register people to vote, participate in community clean ups, and give out more than 200 meals a day with Sen. Street’s office throughout the month of Ramadan. (Pictured right, Nate volunteering with Sen. Sharif Street and Philabundance to kick off the 30-day food drive for Ramadan)

“Because I’ve moved around a lot, I decided to volunteer with the Institute to find a community – to find my niche,” Nate said. “Being in the Gateway program, the staff constantly encourage you. They push you to do things outside of your comfort level.”

When asked how he balances it all – school, work, and his volunteerism – he says, “I just do it.”

Nate was recently recognized by Sen. Street on the Pennsylvania Senate floor for his work as a legislative intern. Throughout his time at Sen. Street’s office, Nate has worked in his Germantown and Jefferson district offices assisting the staff with constituent services.

He was even able to lead a special project where he created a civic engagement curriculum for school-aged children and designed a bookmark to encourage self-guided learning. 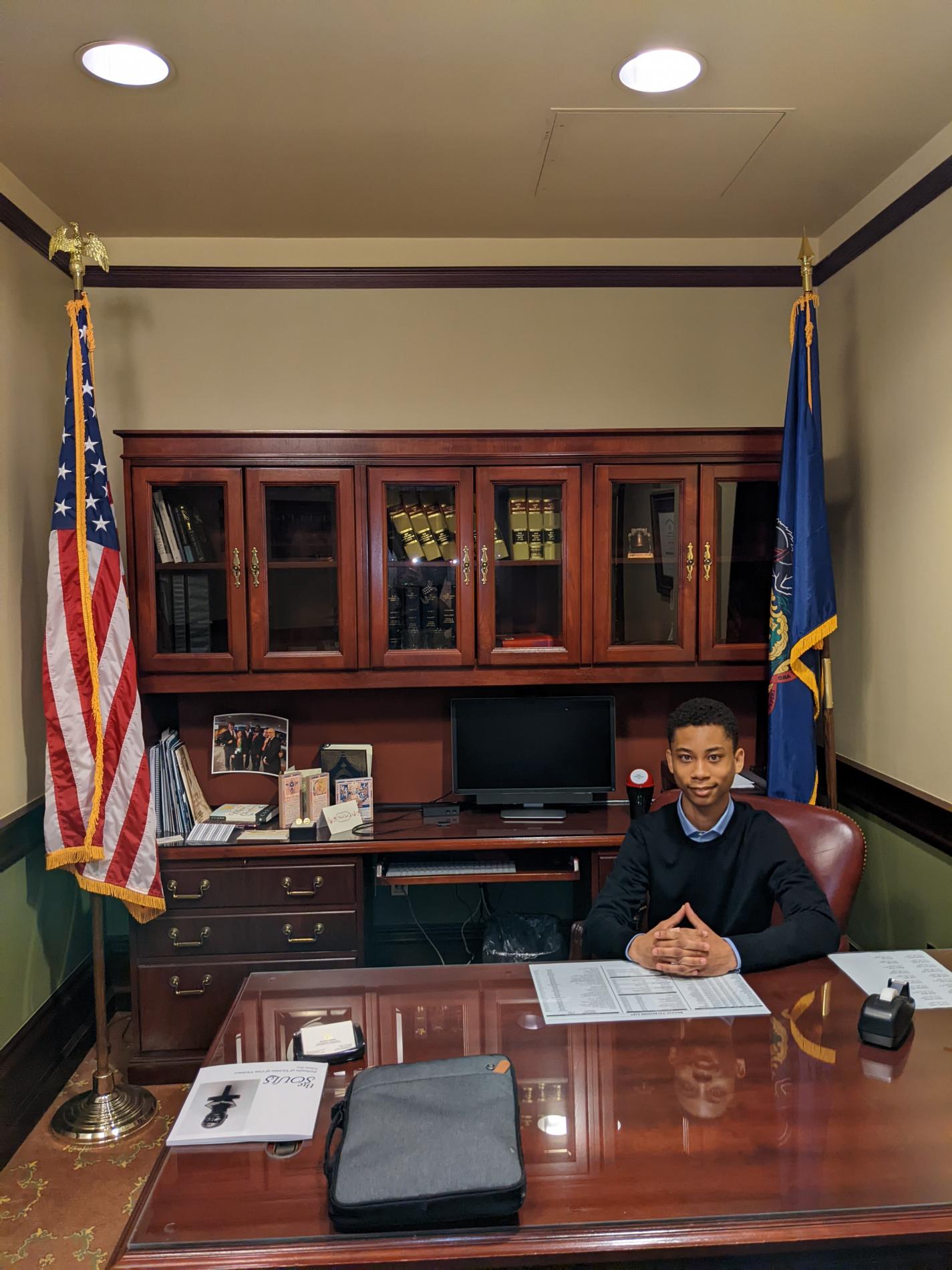 “I’ve always been interested in the legislative process, specifically local politics,” Nate said. “Senator Street’s office is in the community on a very deep level. It’s what made me realize the impact local politics has on our lives and how that impact is often overlooked.”

Nate graduates this June and will be heading to attend his first-choice school: the University of Pennsylvania. He plans to study Economics but is also interested in the Urban Studies program.

“When I visited Penn, I really enjoyed the atmosphere on campus,” Nate said. “Just like CCP, Penn has a lot of great programs on campus and in the city. I want to be a part of that work.”

He added, “During my studies, I’m interested in learning how different systems work, how cities are built, and how this impacts people of color.”

Nate says that post-college, he’s interested in attending law school to study financial law and wants to help people like himself who are living in underserved areas.

After reflecting on his journey over the past five years, Nate was extremely grateful for the support he’s received -- from Monifa Young, the Gateway to College program director, and Michael Miles, the Community Engagement Specialist with the Institute, to Aissia Richardson at Sen. Street’s office. He says everyone has been very supportive and describes his network as “family.”

When asked what motivates him, Nate said, “I have a lot of potential and I want to realize it. I want to help others just like people have helped me along the way. I know there’s a place beyond where I’ve been and all of the challenges I’ve faced.”