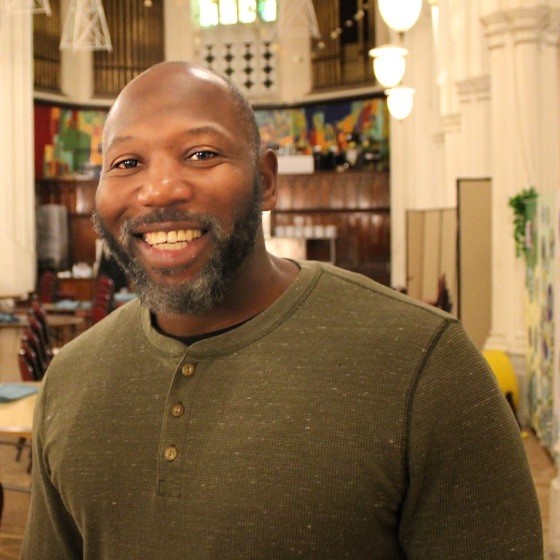 Shahid Guyton ‘17 is a Community College of Philadelphia alum who studied Liberal Arts--Social/Behavioral Science. He now has a bachelor’s in psychology from Ashford University and has been working at nonprofits for roughly five years. In his current role as the Restorative Services director at Broad Street Ministry, he helps housing insecure and impoverished Philadelphians access benefits, housing, hot meals, clothing, toiletries and more.

Although Shahid and his colleagues work hard to provide those in need with the basic necessities they deserve, he says that the job doesn’t feel like work at all. Having experienced many of the same struggles in his own life, Shahid’s passion for nonprofit work comes from seeing himself in those who seek out services at Broad Street Ministry.

Growing up, Shahid’s parents struggled with addiction. Being raised in an unstable environment, he found himself trapped in a cycle of addiction, housing insecurity and poverty. He was homeless from 2000 until 2011, when he moved from Newark to Philadelphia and enrolled in a transitional housing program for men called Ready, Willing & Able. “That program is where I kind of got my start, because it gave me a place to sit down and learn a little bit of basic computer skills, and also start taking GED classes,” said Shahid.

Once he graduated with his GED, a mentor of his pushed him to go a step further.

Shahid attended the College while working two jobs and taking care of his high school-aged children. Setting a good example for them turned out to be one of his biggest motivators.

“I never had anybody to lead by example in my upbringing,” said Shahid. “In my immediate family nobody ever finished high school. So, I had to let them see that this is how you do it, coming from their father. I was the role model there. I had to do that for me and for them.”

Shahid spoke about the rigorous and communal environment found at the College. “It felt like I was at one of those major colleges because that's how the professors would [treat us …] in study groups and being around other students. I felt like more locked in,” he said.

Shahid also participated in “Drop the Mic” during his time at the College and self-published a book of poetry, Spoken Word from the Soul of A Broken Curb.

“What made me gravitate to Broad Street Ministry, for one, is the empathy and the compassion that was given to the guests,” said Shahid. Broad Street Ministry employs a philosophy of “radical hospitality” as well as trauma-informed care in order to meet people where they are, honor the difficulties they face, and ultimately build the kind of trust that will make people want to continue to use their services.

For example, when Broad Street Ministry serves meals, they don’t have guests stand in a meal line. According to Shahid, “it’s just like a restaurant,” with a hostess, waiters to bring people their meals and refill their beverages, and family-style seating around a table.

For students who are looking to earn degrees that will lead them to work in nonprofit and human services, Shahid said, “It's always good to travel to nonprofits and volunteer and see what goes on, so they can get some more experience and get a good feel of if this what they want to do.” He encourages students to volunteer at Broad Street Ministry regardless of their major so that they can connect with their community and practice employing empathy and compassion for the many who are struggling in this city.

In his new role, Shahid continues to create new success stories at Broad Street Ministry and in his own life. “When I moved here in 2011, homeless, addicted, and just like looking for a way to get myself together […] I think that's an amazing story,” he said. “Eleven years ago, I was homeless, and now I'm a homeowner.”