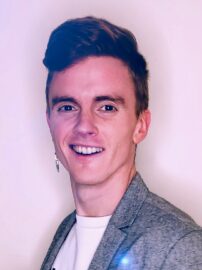 Andreas Copes is a Community College of Philadelphia Mass Media alumni who was named one of 24 Point Foundation Community College Scholars in spring 2020. Now he/they is being recognized once again for contributions made to local media discourse, as well as for volunteer work in his community. In the spring of 2021, Andreas was selected once again for a prestigious Point Flagship Scholarship out of more than 2,000 applicants.

When Andreas graduated from Community College of Philadelphia in 2020, he moved on to Temple University with a plan to not only succeed academically, but to make positive changes in Philadelphia as well.

Having been awarded the 2020 Point Scholarship for Community College Students, Andreas was first recognized for his passion for journalism and advocacy. Working through projects like Phi Theta Kappa’s Honors in Action, Copes established a relationship with a local Planned Parenthood chapter and hosted advocacy events to raise awareness on the barriers that prevent people from accessing sexual health care in the U.S. He also hosted CCPTV’s Focal Point, a magazine show that covers timely topics and campus happenings.

Now in 2021, Andreas is being recognized by Point Foundation once again for his devotion to creating media content that informs its audience on issues that affect marginalized communities. Identifying as an intersectional feminist, Copes’ work at Community College of Philadelphia provided a launching point for his academic career at Temple when he pitched a queer magazine show at Temple’s TV station. Now a host and co-producer of QT – Queer Temple, Andreas’ work is being recognized and used as educational material for media students. Copes also continues to volunteer with local a Planned Parenthood office.

In the future, Andreas aspires to one day be a part of an independent queer, intersectional feminist media outlet. “We need to own our narrative and create empowering stories so we can empower generations to come,” he says.

Point Foundation is the nation’s largest higher education scholarship-granting organization for lesbian, gay, bisexual, transgender and queer (LGBTQ) students. Scholarships include both financial support, and mentorship and leadership development. Read more about the Point Foundation Scholarship and 2021 scholars on Advocate.