Celebrating Patriot Day at the College 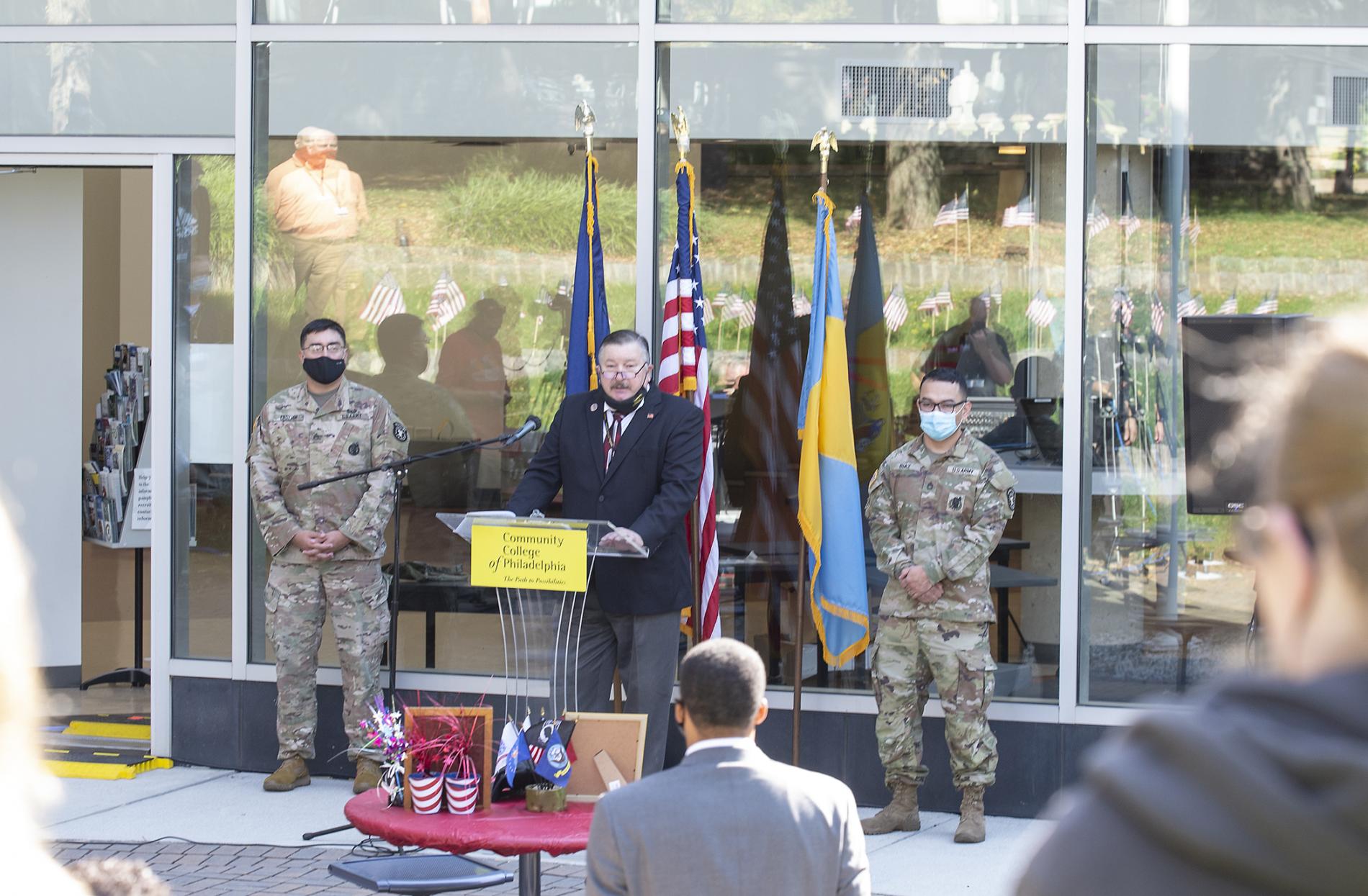 On Friday September 10, students, staff and faculty gathered outside around the Bonnell Circle to commemorate College alumni and Philadelphians who lost their lives 20 years ago during the attacks on Sept. 11, 2001.

Under a clear blue sky, the ceremony began as the American flag was raised and attendees held a moment of silence.

Around the flag stood 45 small American flags; 30 for the victims of 9/11 from Pennsylvania, three of whom were from Philadelphia, 13 for the service members who were lost recently in Kabul and two for our own alumni who were honored that day.

Opening the ceremony with a message of gratitude to all of the veterans and active service members in the audience, Dr. Generals, president of Community College of Philadelphia, gave his remarks.

Each year on September 11, the College comes together to commemorate those who sacrificed their lives for the sake of our country. “Our freedom, our democracy is not guaranteed, we have to continue to fight for it, we have to continue to believe in it,” he said. Given all of the loss and division that has occurred in our country this past year and a half, Dr. Generals’ words rang especially true.

Ending on an optimistic note, Dr. Generals encouraged our community to celebrate our country and the contributions we all make towards its success. “I believe in what we are doing to provide education for those of us who will continue to preserve this country in this democracy,” he said.

On August 6, 2005 Pennsylvania National Guard Sergeant Brahim Jeffcoat died while conducting convoy operations in Iraq. He was a youth counselor before entering the military and was well liked by instructors, faculty and administrators at the College. He left behind his wife and his young daughter.

Jason Mays passed away on March 4, 2021. He enrolled in the Army in 2001, and was deployed to Iraq in 2003, during some of the heaviest fighting of the insurgency. He was awarded many medals, though he was most proud of his Air Assault badge, “which only the most elite soldiers attain,” said Bachovin.

While enrolled at the College, he quickly became involved in student life. He was passionate about Latin dance and eventually became an instructor in the College’s Ritmo Latino club. In 2014 he served as President of Student Council and was named Student of the Year. He earned his associate degree in Business Administration here at the College, and both his bachelor's and master's degrees at Temple.

“To our 911 veterans, thank you for hearing our nation's call and keeping us safe”, concluded Bachovin. “Your service is not only an invaluable contribution to our country, but you remind your fellow citizens of what they can do. We must never forget them. God bless the brave souls of 9/11 and God bless America.”