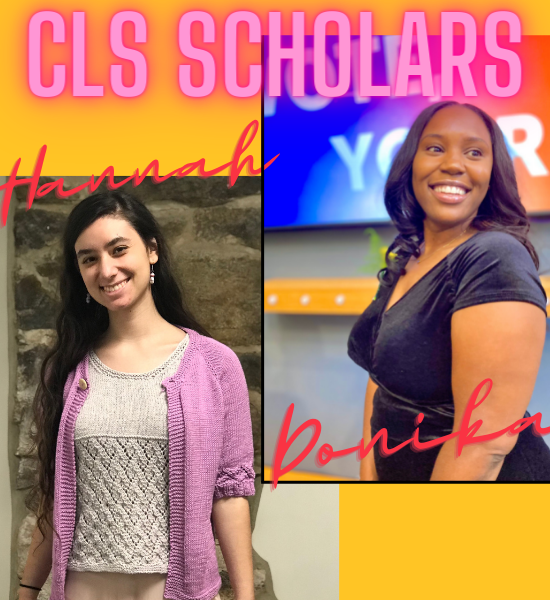 The Critical Language Scholarship is a national program designed to give undergraduate and graduate students the opportunity to quickly learn or sharpen their language skills. Among the many applicants nationwide, two Community College of Philadelphia students earned their place in the Fall 2022 cohort.

Hannah Mc-Kay Simmons, an International Studies major, and Donika Campbell, a Respiratory Care Technology major, have spent the past few weeks in this program taking two free one-hour classes in Chinese and Arabic, respectively. The two have varying experience levels with their chosen languages.

Last week, we got together with Hannah and Donika to talk about why the CLS Spark program is a worthwhile opportunity for students. Read the interview below.

CCP: Why did you decide to take a chance and apply for this program?

Donika: I just really like learning languages. When I was in high school, I took French. At the College, I took Spanish...[I was] just kind of stepping out of my comfort zone and trying to find another language that I might be interested in. Also, when I was in high school, I did missionary work...and I feel like maybe having Arabic would open a door to that.
I'm a people person, so the more languages I know, the more I can connect with people. Some of my classmates speak Arabic, so sometimes I can talk with them and it's really cool.

Hannah: Learning Chinese has actually been a goal for me for a long time. I’ve taken the highest level of Chinese offered at CCP. After I graduate from CCP I'm planning to transfer to Temple to get a degree in Chinese. So, the program was very much aligned with my overall educational goals. Being bilingual is pretty sought after...so I could go into business, I could go into teaching, I could go into government. I was thinking of teaching English in China for maybe a year or two after I graduate.

Donika: The application process was pretty straightforward. They ask your background, some demographics, what kind of activities you're involved in, any end goals, transcripts, things like that. It just took me a little bit to make sure that my essays were up to par. David [Prejsnar, director of The Center for International Understanding and assistant professor of History, Philosophy and Religious Studies] coached me and told me what I should put in there, and to make sure it's authentic.

Hannah: My program is definitely designed to be immersive. One really cool thing is it's through a Taiwanese university, so to have teachers that are from a Mandarin Chinese speaking country...it feels almost like you're actually traveling abroad. There are two different levels. I'm in the lower level. Even in the lower level you're not allowed to speak English at all so that was a little intimidating, but it's been okay. If we're confused, we can ask a question in English or the teacher will sometimes say something in English if it's clear we're not getting it.

We have two hours of class per week, but then [we] also do half-hour, one-on-ones once a month with the teacher. [There are] eight people in my class. So, you get a lot of attention because it's such a small class size. And then also we do cultural activities once a month.

Donika: I like it because it's very straight to the point. It's one hour, but it's an intense hour. And then you have homework assignments. We're learning something new each unit, and then when we're in class, we're writing what we learned, we're saying what we learned, we're talking to each other. And I feel like I spend maybe an hour or two on the homework. So, it's very flexible. I'm [still] able to get through my program at school, because that's very intense as well.

CCP: Did you find anything surprising about the program?
Donika: I didn't think that I would get a chance to know so much in such a short amount of time. I'm surprised that I already learned and know so much. It's only been maybe a month, but I feel like it's going well.
Hannah: When people introduce themselves [in the beginning of the term] and say their colleges, [they're from] the whole country. So, the fact that there's two CCP students is pretty cool.

CCP: What is your advice to students who apply?

Hannah: If you're going [to apply to the program], that should really be something that you want to do, and that you're prepared to really put your all in and take advantage of it. You have to really care about learning the language.