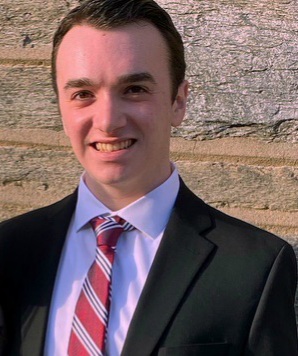 “I will miss CCP so much. This place means so much to me,” said Joseph DeFeo, an English major who graduated with the Class of 2022. “I’ll always be a CCP Lion.”

Joseph started at the College in fall 2019, immediately getting involved with Philadelphia L.E.A.D.S., participating in a toy drive the student organization ran that year and the student retreat held in Maryland. He was drawn in by his inviting peers as well as the mission behind L.E.A.D.S., which encourages students to make good decisions and become leaders in their own lives. The leadership society program helps instill leadership qualities at varying stages of a student’s life by teaching them a framework to approach leadership from multiple perspectives.

Joseph enrolled at the College declaring Nursing as his major, thinking it was a good way to make money and live a sustainable life. His family encouraged and supported his decision, but plans for Joseph’s future changed once he became involved with L.E.A.D.S.

“Being a part of L.E.A.D.S. changed me in a lot of ways,” he said. “I realized in order for me to enjoy and have a good life, I had to take leadership of my life.”

Joseph came to realize Nursing wasn’t the right program for him. Instead, his real passion was in English, so Joseph switched his major, which led to questions from his family about his decision and future plans. But Joseph was confident in his decision, thanks to support from the L.E.A.D.S. program, which encouraged him to follow his interests.

Calling the College “a family,” Joseph shared he felt he belonged at CCP since he first stepped foot on campus. He was also involved in many other areas of the College, including The Vanguard and CCPTV’s Focal Point, and the support he’s received has only added to the noteworthy student experiences he encountered since enrolling.

Joseph is headed to West Chester University to earn his Bachelor of Science Education in English degree (B.S.Ed.). After that, his dream is to return to his home at CCP to teach an English class.