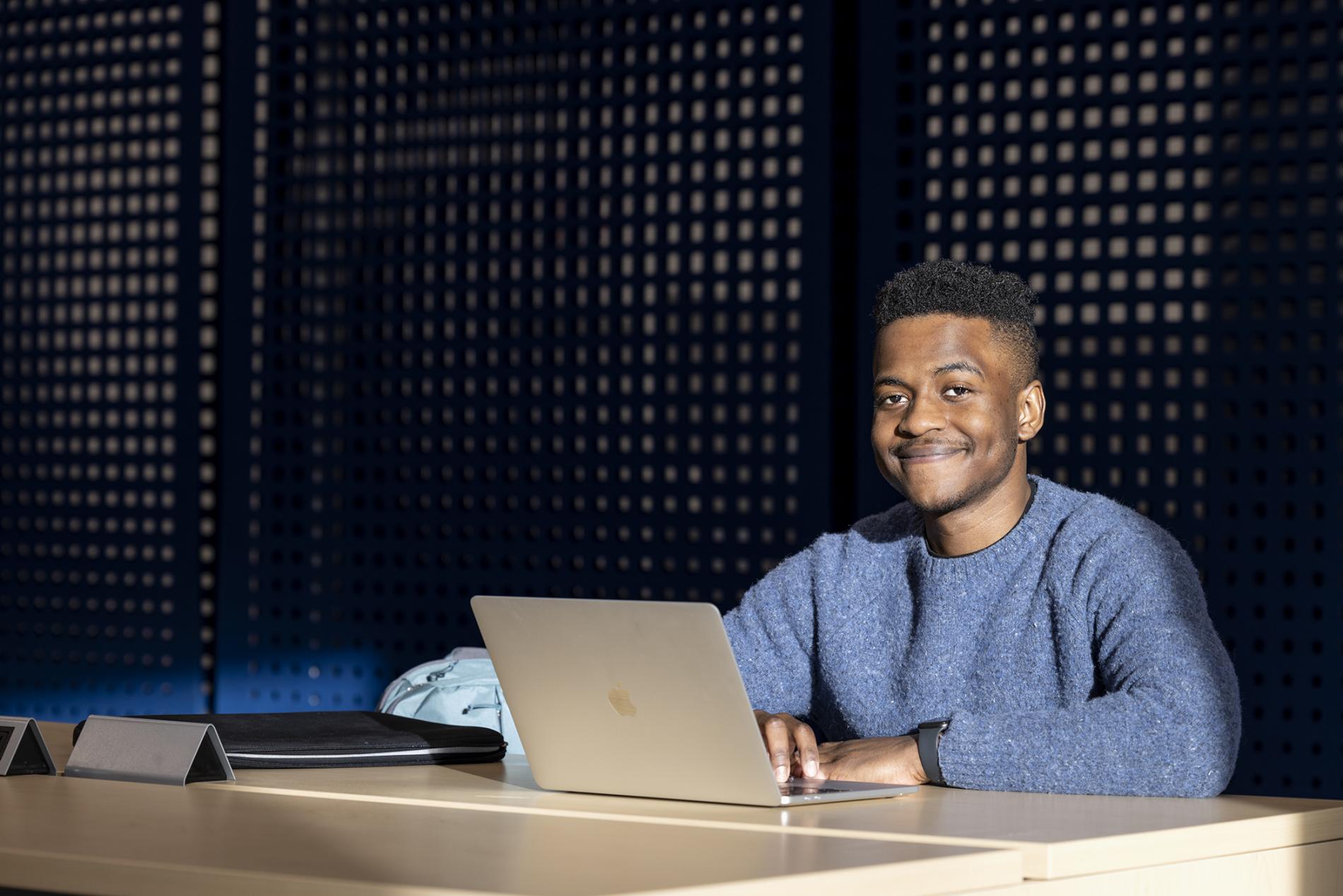 After graduating from Central High School in 2018, Ahmad joined Job Corp’s Advanced Career Training program to pursue his passion for culinary arts. With a grandfather who owned a deli, and family members who own land to grow fresh fruits and vegetables, Ahmad explains that he has always understood what it means to be a land steward. This understanding further fueled his desire to become a chef.

He says that he’s always wanted to go to college but didn’t want to take out debt to do so. Upon completion of the Job Corp program, he was offered a scholarship to attend the College.

When asked why he decided to enroll, he said, “This was the best choice for me.”

Ahmad is proudly blazing a trail of his own advocating on behalf of issues such as food insecurity and worker’s protections. His grandmother was the late Augusta Clark: the second Black woman to serve on Philadelphia’s City Council. You could say activism is in his blood.

It wasn’t until his time at Job Corp that he first got involved in politics.

“After I started working in the restaurant industry, I noticed workers were not being treated fairly,” Ahmad said. “Some people were fired without reason, paid less than others for the same work, or given schedules that did not accommodate them.”

Determined to make a change, he joined One Pennsylvania (One PA): a multiracial, intergenerational, and multi-issue membership organization advocating on behalf of good family-sustaining jobs, strong and healthy communities, and corporate accountability.

He’s been able to testify in front of City Council about his experience in the restaurant industry and help enact Philadelphia’s Fair Workweek law. He remembers how powerful he felt and realized at that moment that he could truly make a difference.

He was able to bring that energy on campus in his role as the SGA president by connecting students with on-campus resources, helping to create a smooth transition back on campus after months of virtual learning, and making sure that student life remained vibrant.

Despite the challenges of community organizing, Ahmad describes himself as an optimistic person.

“Some people say, ‘that’s foolish,’ but I think cautious optimism is the only way forward,” Ahmad said. “We can’t be satisfied with massive wealth inequality or having to go into debt just for a chance to advance our social status. Our work is the wildest imagination of our ancestors, and we have to keep pushing until that’s our reality.”

When asked to reflect on his time at the College, Ahmad said, “I’ve received a very well-rounded education at CCP. You can come in with your mind made up wanting to do one thing and then you’ll leave with the tools to develop a better plan.

“Not only am I a better chef, but I’m also a better leader. I’m more knowledgeable about how our government works and how to run my own business.”

After graduating with an associate degree in Culinary Arts this May, Ahmad will be heading to Disney World in June to participate in the Disney Culinary Program. He’s looking forward to honing his craft – especially in fine dining.

After wrapping up the internship in December, he will pursue his bachelor’s degree in Sustainable Food Systems at the Culinary Institute of America in Hyde Park, NY. For Ahmad, it’s a full circle moment that allows him to earn a degree in what sparked his passion for culinary arts: urban agriculture and supporting undernourished communities.

“I’ve always loved the connection between food, culture, and community,” Ahmad said. “Food is a human right. I want to create a restaurant that also serves as a community partner to provide not only nutritional shelf-stable foods, but fresh fruits and vegetables to help reduce food insecurity.”

He added, “I’m interested in seeing how I can achieve my goals through my passion and help people along the way.”