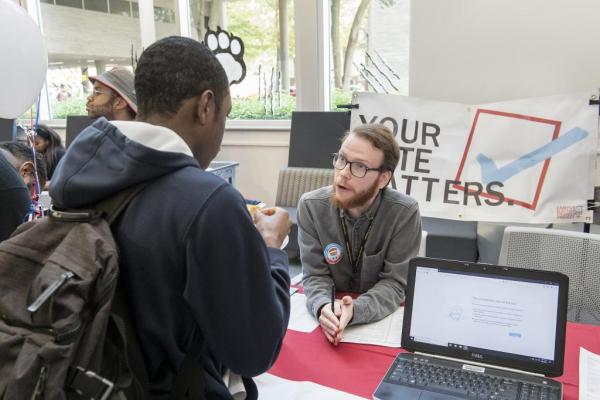 With a passion for grassroots organizing and connecting underserved communities to valuable resources, Benjamin Nixon, ’20, is using his voice and providing College students across the country with a platform to make a difference.

On Feb. 8, he helped launch the Student Voting Network (SVN) Podcast: a nonpartisan platform for and by students to express their views, share insight, organize for a better future and learn efficient methods of reaching student voters in meaningful ways. The podcast is a Campus Vote Project initiative he worked to launch as a Democracy Fellow.

“For some time, we were looking for ways to be more engaging outside of social media. That’s where the idea for the podcast came from,” said Nixon. “We wanted to create a space where students from across the country could start a conversation about the issues that matter most to them. On the podcast so far, we cover everything from the Jan. 6 insurrection at our nation’s Capitol, to combating white supremacy in American culture and educational spaces, and even how students and interns can properly prepare to enter the workforce.”

Nixon has previously worked on a few Democratic campaigns, most recently in Maryland. After both campaigns he worked on in 2014 lost by a small margin, he felt disillusioned with the process for a while. However, instead of giving up, his passion for community and civic engagement pushed him to do something more organic.

In 2019, he volunteered with the College’s Institute for Community Engagement and Civic Leadership to register students on campus to vote. That’s where he learned about Campus Voting Project’s fellowship program.

“After volunteering on campus with Michelle Lopez, who manages the Institute, I wanted to find ways to stay involved civically. I learned about the Democracy Fellowship program and was accepted shortly after applying. After participating in the fellowship for a year, I then applied to serve on the Student Advisory Board, where I currently work to get college students across the country more democratically engaged. As of now, I’m the only student to represent the Pennsylvania and New Jersey areas,” he said.

After graduating last May with an associate degree in psychology, Nixon now works here at the College in academic advising for the Division of Educational Support Services. He currently attends Rutgers University – Camden pursuing a bachelor’s in psychology and is double minoring in criminal justice and national security studies.

In his free time, he still works with Michelle Lopez to organize voter registration drives and find ways to keep students informed and civically engaged. You can learn more and subscribe to the Student Voting Network Podcast through their Spotify channel or by emailing svncast@campusvoteproject.org.