Three high school students learn a crucial lesson in college: “We have to take charge.”

It was in college that Quadir Gamble first learned that he is the key to solving the city’s toughest challenges. If he wants a better community, then he has to work with others toward common goals.

“We are all connected,” Gamble said. “When we all get together and work together, we can make an impact on our community.” This was his key takeaway from assistant professor Jamie Gusrang’s sociology class at Community College of Philadelphia (CCP)

Gamble is a junior at Parkway Center City Middle College, where students can earn a high school diploma and a CCP associate degree in just four years. Gusrang assigned her students to participate in community service either by volunteering or tackling a community issue. Service-learning affords students a chance to use lessons learned in class to affect the world around them, she said.

Gamble and classmates Jaden Burnett and Frank Gillis-Corbitt, decided to create a basketball tournament that would bring Philadelphia police officers and youth together for a fun activity so each could see the other through different, clearer eyes. 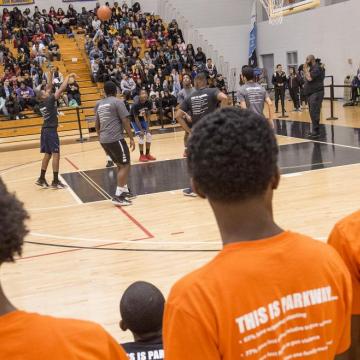 With support from their teachers and college staff, the trio organized a basketball tournament that would include Parkway students, teachers and staff, and members of the Philadelphia Police Department. The game, held in November 2019 and widely covered by local media, sparked a conversation that went far beyond police-community relations.

Helen Ubiñas, a metro columnist for the Philadelphia Inquirer, wrote that the event was important for the spotlight it cast on the impact of gun violence and for the more than $1,800 it raised for Moms Bonded by Grief to buy Christmas gifts for the children of murder victims.

However, the young men also gave the city a reason to hope. “Things can often feel mighty bleak in our city. But as dire and divided as Philly is at times, it’s important for all of us to remember that there are good things going on in every neighborhood, and that there are people who care deeply about the city and every single day are fighting to make it better,”Ubiñas wrote.

The Philadelphia 9th District police officers who participated, ranging from age 24 to 48 years, billed themselves as the All Stars. Officer Jesse O’Shea said the department appreciated the invitation and plans to expand the concept next year by adding more basketball tournaments between high school youth and police.

“All of us have common ground,” O’Shea said. “We need to find and build upon it.”

Ultimately, the 10th graders from Parkway triumphed in the tournament, defeating the team of police officers by a score of 20-13. But this wasn’t really about a basketball game, Gillis-Corbitt said. It was about collective responsibility.

One of his key takeaways from sociology class was that society can and does change for the better, when enough people decide to do something. Said Gillis-Corbitt, “We have to take charge.”