College's Response to the Coronavirus (COVID-19)

Find Your Academic and Career Path

Whether your goal is to earn an associate’s degree, transfer to a four-year college or start a new career in an in-demand field, Community College of Philadelphia has a program to help you down the path of achievement. Explore our full array of academic and proficiency certificate programs by searching the program name or Academic Pathway, or by scrolling down and selecting the program of your choice.

Deesha was unable to join her fellow graduates at Community College of Philadelphia’s 2012 Commencement. She had good reason, however, she was working at the White House, and traveling with President Barack Obama. Deesha finished her degree while still in Washington, DC, completing her final classes online. Four years later, as the White House Social Secretary, she will return to Philadelphia—to pick up her associate’s degree in front of her family and friends and serve as the speaker at Community College of Philadelphia’s 50th Commencement.

Deesha returns to an institution that has supported the President’s College Promise campaign by developing the 50th Anniversary Scholars Program, which offers tuition at no-cost for low-income, qualified students graduating from Philadelphia high schools.

“I’m very honored to have the chance to come back home and speak at my alma mater. Without Community College of Philadelphia, I would have never made it to the White House. I hope my journey from Community College of Philadelphia to the White House will inspire the graduates to continue to pursue their dreams and use their degrees to better their communities,” said Deesha Dyer. 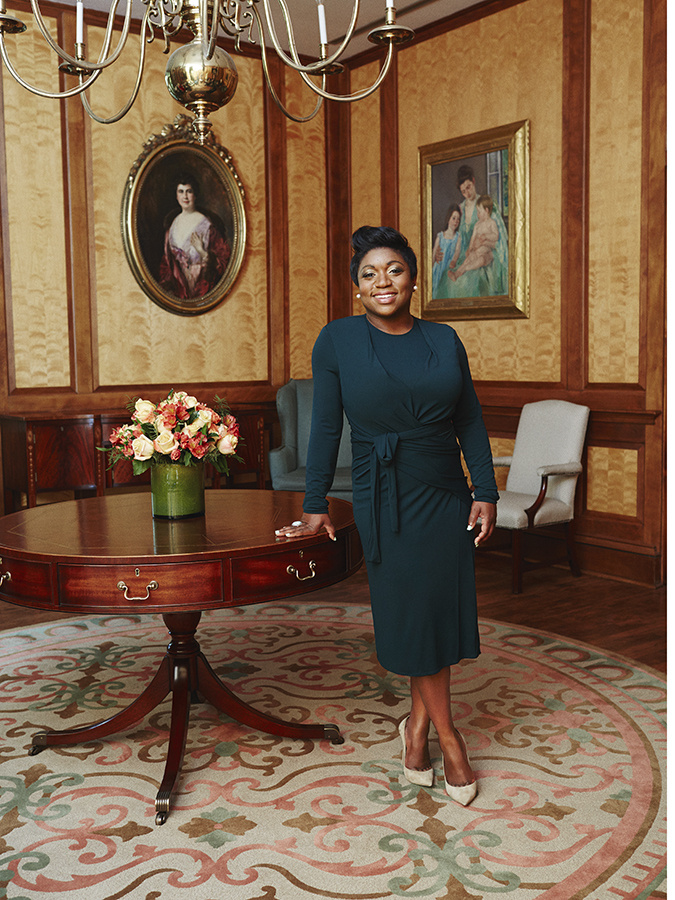 Deesha was raised in both Philadelphia and Hershey, where she attended the Milton Hershey School. She started at the White House in 2009, at the age of 31, after applying for an internship in the Office of Scheduling and Advance. She was hired full time in 2010 as the Associate Director for Scheduling Correspondence, and moved on to become the Deputy Director and Hotel Program Director in 2011. In that role, Deesha traveled with the President and First Lady working on press, lodging and site logistics.

As many Community College of Philadelphia graduates do, Deesha has also maintained a long-standing commitment to community advocacy in several capacities, including her role working with young adults at the Youth Health Empowerment Project, as creator of a hip-hop AIDS program based in Philadelphia, as a CARE advocacy volunteer and as a board member at Action AIDS. She currently volunteers with the homeless community in Alexandria, VA, and mentors young girls for a global empowerment program in Philadelphia. She also serves as a mentor in the First Lady’s mentee program.

About Community College of Philadelphia

Community College of Philadelphia is the largest public institution of higher education in Philadelphia and the sixth largest in Pennsylvania. The College enrolls approximately 34,000 students annually and offers day, evening, and weekend classes, as well as classes online. Visit the College at www.ccp.edu. Follow us on Twitter. Like us on Facebook.

You don’t need to take a break from earning credits over winter break. Take an online class and accelerate your path to a degree. Winter term classes are held December 16, 2019 through January 10, 2020.

Yes, I want to enroll in Winter Term classes >>

Explore the careers, salaries and job demand linked to your program of interest.

Complete our online admission application to start on your path to success.

People of the College

SHAWANA
I went to CCP for a while, then I stopped. I was laid off from my job last September. One of my goals was to just focus on school. So when I was laid off, I took the opportunity to come back. Because of CCP’s policies, a lot of my classes transferred and I was able to come back and only take about three to four classes. My plan after graduation is to begin at La Salle while working part time. My education is so important. I let my work get in the way previously; now I’m taking my education seriously!
Read Shawana's Story
KAVON
I’m currently at Temple University studying Theater and Business Administration. In my high school, I was encouraged to think outside of the box and think about time management. My counselor from my high school recommended we go to CCP first because the College adds a lot of value and character for students. I ended up enrolling in CCP with a full ride!
Read Kavon's Story
PALUMA
I come from Puerto Rico, so the easiest way to transfer my credits and not have a big student loan was to come here to CCP. I was looking around at other colleges and CCP seemed like a really good fit for what I was looking for—and I heard good things. I’m glad I did.
Read Paluma's Story
SYMEON
My major here at the College is Business Administration. All of the ‘fun’ activities I thought were just for ‘fun’ as a kid were actually business-related so I decided that would be the best career to get into.
Read Symeon's Story